Incident 60 occurred when a 48 year old York man set off for a walk towards the Bloworth Crossing area from the Village of Chop Gate. He had phoned a friend at 1730 hours saying that he was disoriented in the darkness and fog and couldn’t find his way back to his car.

After waiting to see if the man managed to make his way to safety his friend alerted Scarborough and Ryedale Mountain Rescue Team who commenced a small scale search with their land rovers from the Lion Inn at Blakey. By 2300hrs no trace of the man had been found and Cleveland MRT along with Scarborough and Ryedale MRT initiated full team callouts.

Cleveland Team based their search at Clay Bank carpark and searched the area around the man’s last known position with search parties on foot and in land rovers. At 0100hrs the man was located by one of the parties around 200 metres from a moorland path sheltering in a ruined building. He was transported in one of the land rovers off the moor tops to the safety of his car at Chop Gate.

The incident lasted around 3 hours and involved 18 Cleveland Team members with more from Scarborough team.

The incident shows the importance of being prepared, the man was well equipped and did the correct thing in realising he was lost and seeking shelter until daylight. 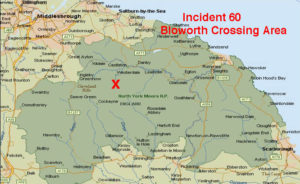