We were called by YAS to assist with a crashed biker in the Whitegate Farm area near Great Ayton as we were responding we spotted the ambulance vehicles by Thief’s Lane which leads to the quarry outside the village that is popular with cross bikers. We responded with a team land rover to this location and found the ambulance paramedics dealing with a 14 year old Middlesbrough boy who had crashed his bike on a jump. As he had leg injuries, we carried him on one of our specialised mountain rescue stretchers the few hundred metres to the waiting ambulance for transport to James Cook University Hospital.

The incident lasted about an hour and involved twelve team members. 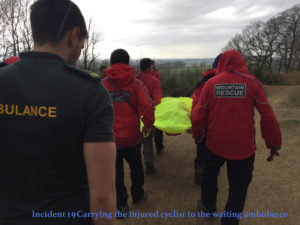