THE volunteers of Cleveland Mountain Rescue Team have started 2017 with an unprecedented number of callouts, averaging two incidents a week.

In 2016 the total number of incidents was 37. In the first two months of this year they have attended 14 callouts.

This weekend the team was called out on three occasions to deal with walkers who had all slipped on muddy paths and sustained lower leg injuries.

On Friday a 25-year-old lady from the Loftus area slipped in Guisborough Forest. The lady was treated at the scene by ambulance paramedics before being carried by the rescue team a few hundred meters to a waiting ambulance.

On Saturday a 55-year-old lady from Leeds was injured on the moors above Osmotherly. She was treated at the scene by team personnel before being carried off the moor 500m to an ambulance.

On Sunday the team were called to Coxwold, at the extreme south of their operating area, where an 81-year-old man from Malton had slipped whilst walking with his family, injuring his leg. He was carried by the mountain rescue volunteers 400 metres across farmland to the waiting ambulance that took him to York District Hospital for treatment.

Team Spokesman, Pete Mounsey, said: “Lower leg fractures are one of the most common injuries that we deal with, its quite a coincidence to get three similar accidents in one weekend with people just slipping on the wet, muddy paths.” 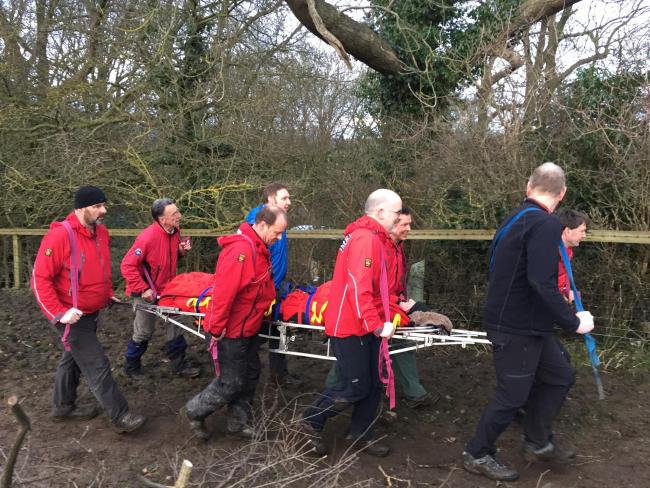